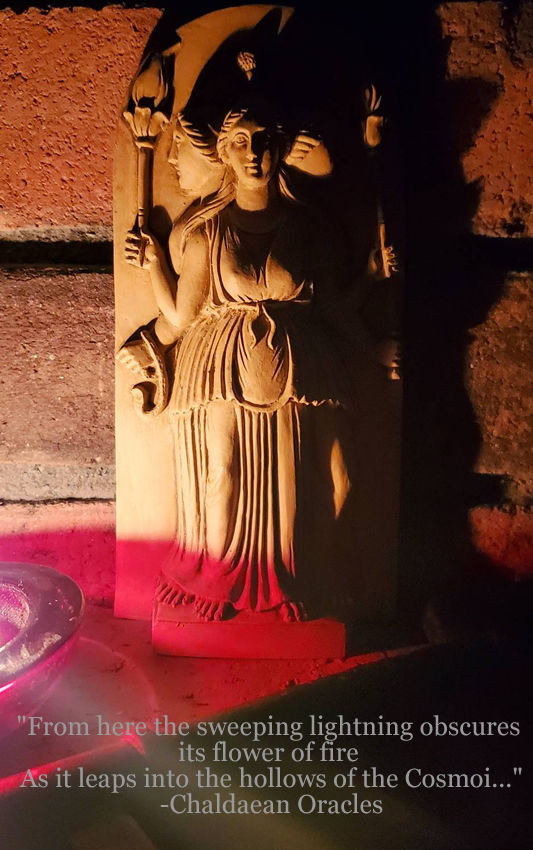 In keeping with the Covenant of Hekate’s February theme of celebrating Hekate as Cosmic World Soul, here is another short post about Hekate’s Cosmic Womb in the Chaldaean Oracles.

In a nutshell, Hekate’s role in the Chaldaean Oracles is that of mediatrix between the Paternal Intellect – the Father – and the sensible / physical world. The passage in fragment 35, quoted in the above photo, suggests that the Father (intellect, thought) “impregnates” the Cosmic Womb of Hekate with ideas (thunderbolts), and creation bursts forth from Her fiery womb to the universe.

Hekate, as the Cosmic Womb, receives the ideas from the Paternal Intellect, and births these ideas through Her womb, which then helps form the physical world.

Fragment 34 of the Chaldaean Oracles states:

“From here springs forth the genesis of varied matter;

From here the sweeping lightning obscures its flower of fire

As it leaps into the hollows of the Cosmoi; for from here all things

Begin to stretch forth towards that place beneath the wondrous rays.”

“These are the thoughts of the Father, after which is my enwrapping fire”

Hekate is known as a liminal goddess; one who oversees the boundaries in life, whether they are physical or beyond. It makes sense that She mediates the ideas of the Paternal Intellect, forming boundaries and helping to separate these ideas into the physical world.

As mentioned earlier, the Covenant of Hekate is celebrating and honoring Hekate as Cosmic World Soul for the entire month of February. A hashtag of #hekateworldsoul is being added to all public projects, so if you are on Twitter, Instagram, Facebook, or any other medium that utilizes hashtags, you may find these other works by searching #hekateworldsoul . Also, if you feel inspired to share your own experiences, be sure to include the hashtag so others can find you.

For Hekate as the Cosmic World Soul, February 2018 – a CoH devotional project – www.hekatecovenant.com